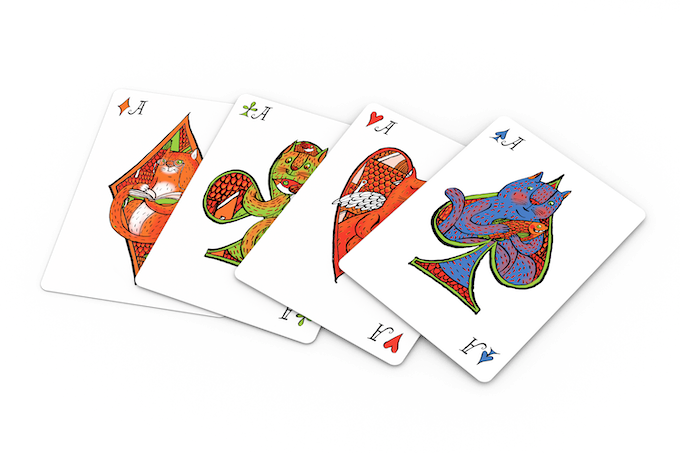 The aces depict stylized cats – who are one of the unofficial symbols of Užupis. Cats like Užupis are warm and independent! There is even a line in the Užupis constitution dedicated to cats:

13. A cat is not obliged to love its owner, but must help in time of need.

There are quite a few sculptures dedicated to cats. The cat depicted in the picture above can be found at the beginning of Polockas st.  The description below the statue says: ‘Touch my ear and have no fear’ — no fear to help, to reach for something you desire, to let go, to move mountains, to dream, to love, to forgive. Scratch his ear and believe. 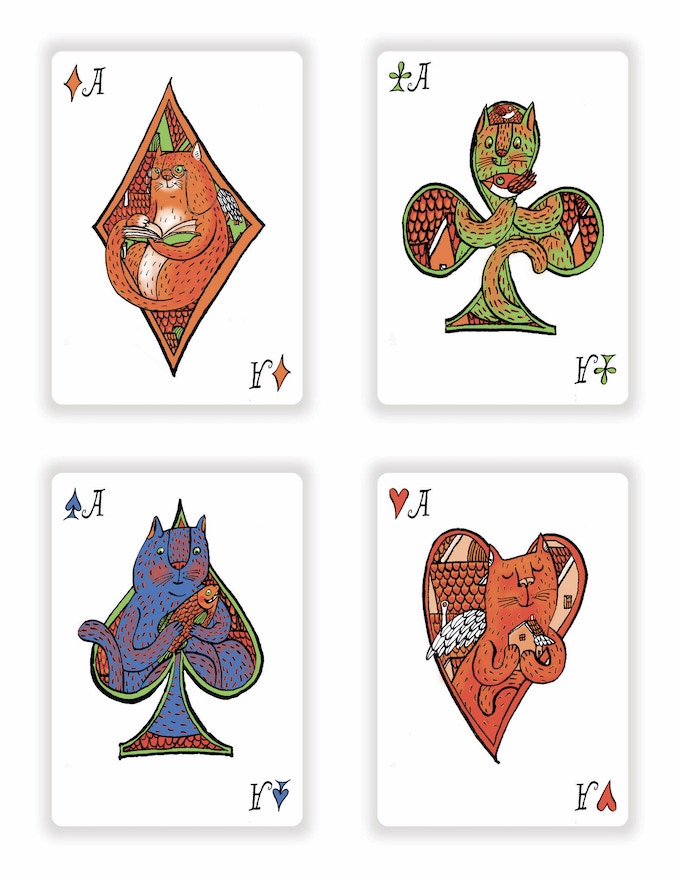 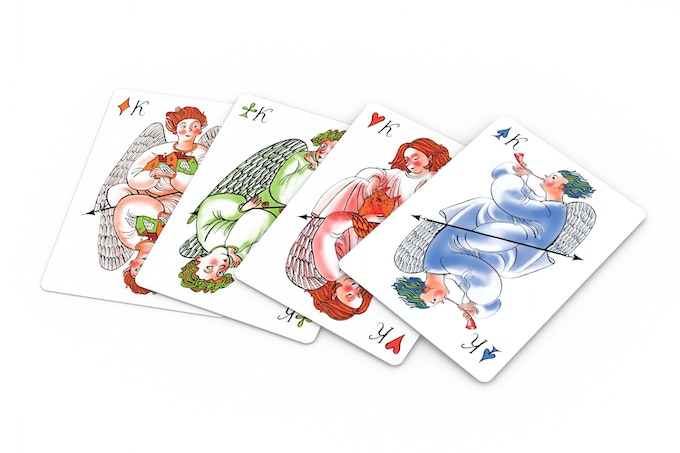 Each king depicts an angel as angels are one of the main symbols of the district. For example, “Angel of Užupis” a statue situated in the center of the district is probably the most well-known sculpture in Užupis. Legend has it that the Dalai Lama suggested placing the Angel of Užupis in its current place on one of his visits to Vilnius.

But the truth is also very beautiful – residents of Užupis were looking for a place to perpetuate the guardian angel of Užupis, Zenonas Šteinis, an artist and active member of the community. He helped to transform the once ruined district into the vibrant Užupis we know today. 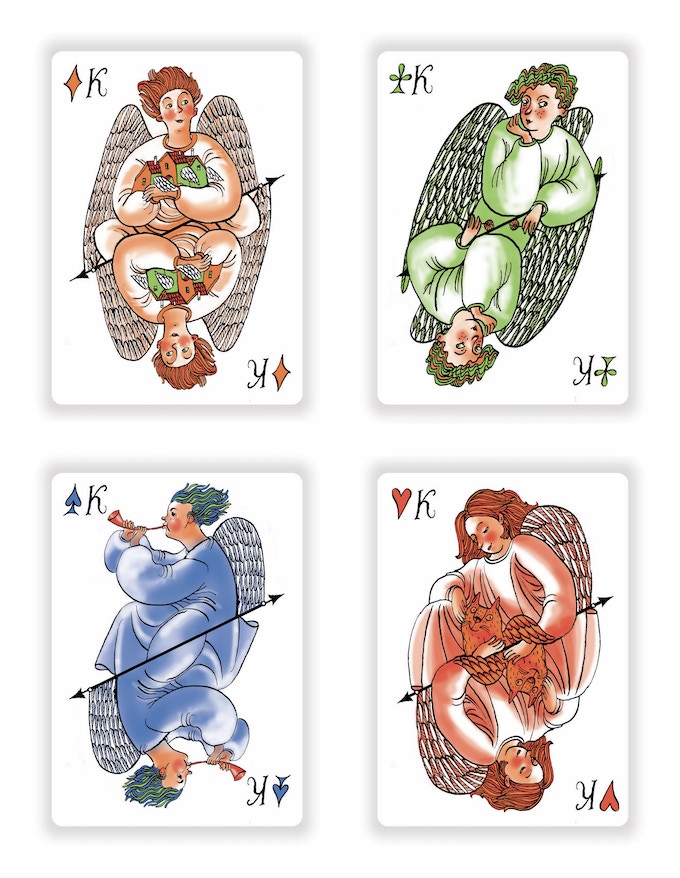 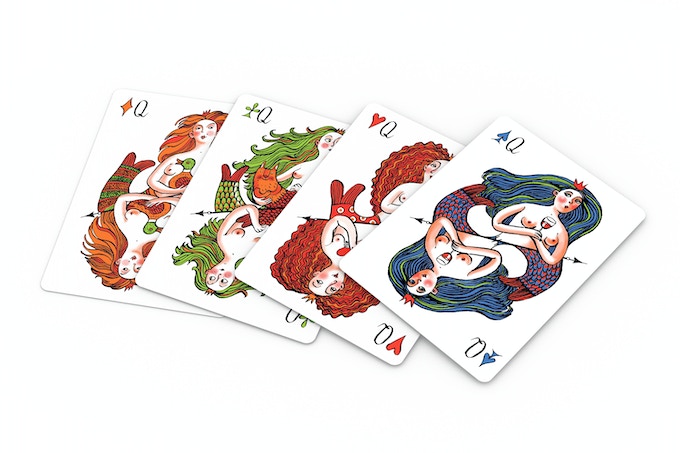 Užupis is situated next to a flowing river, so it is not a big surprise, that mermaids have become another symbol of the district as well. In fact, you can find a bronze sculpture of Užupis Mermaid (also known as Užupis Girl) in the district. It sits in a niche on the bank of the Vilnelė River, right across the river from the renowned Užupis Cafe.

Whether you go over the Užupis Bridge or are enjoying the water flowing under it, you will surely notice the Mermaid. The sculpture, with its flowing hair, tail and thoughtful glance following each and every person, is small, simple and yet so special.

There are a lot of stories about soldiers visiting Užupis. For example, in 1579 Steponas Batoras, a famous Grand Duke of Lithuania,  took his army through Užupis to take back Polotsk from Tsardom of Russia. The army of this duke was known for its special winged Hussar squads (see the picture below).

The hymn of Užupis also mentions the guardian of Užupis, whose goal is to protect our dreams and hope.

Only a watchman keeps a heart up on a rooftop

So nobody can put it out in deep

Souls get together on the shores of dreamy twilight

White snowflakes falling down from your eyelashes…

This is why jacks are soldiers and each jack holds something that reflects openness, dreams, and love  – a cat, a pipe, a neckless with a hand on it (the symbol of Užupis republic) and a mug of beer (there are quite a few bars in Užupis 🍻).

Each number card has beautiful stylized suit symbols and if you look really close into them – you will see that each suit contains the tiled rooftops of Užupis.

The back designs have been inspired by the tiled roofs of Užupis buildings.

Even today a lot of houses in the district are heated with wood – thus, during winter you will definitely see pillars of white smoke rising from the chimneys.

Jokers display the mermaid cats 😅a cross between the two symbols of Užupis – cats and mermaids.

The box displays beautiful rooftops of Užupis, fragments of a mermaid, and the cat from the ace of hearts, which is lovingly clenching a small Užupis’s house.

Anastasija Bereza – an artist and graphic specialist.  She is a member of the Russian painter’s association. In 2017 she moved from Murmansk to Vilnius. Her art has been displayed in exhibitions in Lithuania, Russia, Norway, Estonia, and Austria.

There are no reviews yet.

Be the first to review “Užupio kortos” Cancel reply
We use cookies on our website to give you the most relevant experience by remembering your preferences and repeat visits. By clicking “Accept All”, you consent to the use of ALL the cookies. However, you may visit "Cookie Settings" to provide a controlled consent.
Cookie SettingsAccept All
Manage consent

This website uses cookies to improve your experience while you navigate through the website. Out of these, the cookies that are categorized as necessary are stored on your browser as they are essential for the working of basic functionalities of the website. We also use third-party cookies that help us analyze and understand how you use this website. These cookies will be stored in your browser only with your consent. You also have the option to opt-out of these cookies. But opting out of some of these cookies may affect your browsing experience.
Necessary Always Enabled
Necessary cookies are absolutely essential for the website to function properly. These cookies ensure basic functionalities and security features of the website, anonymously.
Functional
Functional cookies help to perform certain functionalities like sharing the content of the website on social media platforms, collect feedbacks, and other third-party features.
Performance
Performance cookies are used to understand and analyze the key performance indexes of the website which helps in delivering a better user experience for the visitors.
Analytics
Analytical cookies are used to understand how visitors interact with the website. These cookies help provide information on metrics the number of visitors, bounce rate, traffic source, etc.
Advertisement
Advertisement cookies are used to provide visitors with relevant ads and marketing campaigns. These cookies track visitors across websites and collect information to provide customized ads.
Others
Other uncategorized cookies are those that are being analyzed and have not been classified into a category as yet.
SAVE & ACCEPT
Shopping Cart